The Future is Wireless

It’s hard to imagine a world without wires, but that’s precisely where we may find ourselves in the next few years, with 2018 serving as an especially pivotal moment in wireless adoption and breakthroughs. For years, manufacturers have promised an end to “wirey, tangled-mess woes,” but it’s looking as if they are now making good on their promise. With the prevalence of Wi-Fi in homes, cafes, airports, and basically anywhere else you may find yourself needing internet, the need for physical network cables, like ethernet cables, have pretty much become obsolete. And speaking of cafes and airports: many of them now offer free wireless charging stations.

Since Apple unveiled their commitment to the Qi wireless charging standard in their latest iPhones this past fall, the wireless charging industry, which had been plagued by a lack of standardization, seems to be siding with Qi from here on out. Soon after the big Apple announcement, Powermat, who provide wireless charging mats at Starbucks, said that they will add Qi compatibility to their product. But Apple isn’t the only company who has sided with Qi: Samsung (Galaxy S8, Note 8), IKEA, and a plethora of automobile manufacturers have began to support Qi wireless charging. Who else will begin to support this standard in 2018? We expect a lot more manufacturers to follow suite. However, this sort of charging isn’t technically wireless (the charging mat still needs to be plugged into an outlet). But there are a few companies who are creating charging options that are truly wireless, such as Energous, Ossia, and Wi-Charge. (To learn more about these companies, check out this blog post).

To the irritation of many users, smartphones are doing away with the 3.5mm audio jack, paving the way for the exclusive use of Bluetooth wireless headphones (unless you use a dongle to plug your wired headphones into your phone’s Lightning port or USB-C port). But companies like Apple and Google would rather you spend $150+ on a pair of their wireless AirPods or Pixel Buds. And unfortunately for all us audio-enthusiasts out there: the audio quality produced by Bluetooth headphones is worse than a wired headset because audio is re-compressed over Bluetooth. So, the extinction of the audio jack on the smartphone may solve the problem of having to untangle your headphones before each use, but it significantly cheapens the user’s listening experience.

But there are many things to look forward to in the years ahead: there’s the expansion of wireless charging for laptops and 5G wireless services, just to name a few. And we’re sure to see many more innovations down the road, because wireless technology is essential to the smart home of the future. But one thing we know for sure: with Blackfire technology embedded into a smartspeaker, smart TV, set top box, smartphone and more, the whole home can be wirelessly connected. Combining individual entertainment systems to work together, creating a truly connected smart home is non trivial – it requires precise synchronization, low latency for lip sync, and a general reliability over standard Wi-Fi (the best and most commonly used communication protocol for the home.) Something like this has not been done before – until now.

Blackfire provides the industry’s only wireless and entertainment-centric infrastructure software framework built from the ground up to both overcome the limitations of Wi-Fi when used for media applications, and meet the needs of wireless entertainment-related consumer applications and products. It’s not enough to merely have Wi-Fi connectivity between consumer products. Real-time exchanges of entertainment content require a common framework that can work reliably over Wi-Fi, and has a rich set of features for a broad spectrum of entertainment products. Blackfire technology also supports low latency and multi-channel, which other wireless solutions do not.

It may be hard to imagine a world without wires, but with Blackfire in your entertainment devices, cutting the cord has never felt more seamless.

Getting the Most out of your Router

In my two previous blog posts, I recommended purchasing either the ASUS RT-AC56U or the ASUS RT-AC68U; explained why I chose the ASUS RT-AC68U router for my own home; and walked you through the setup of 2.4GHz and 5GHz bands for best performance. In this post, I’m going to show you how to tune your router to avoid wireless network traffic from other routers near by.

First off, how do WiFi frequency ranges and channels work?

The 802.11 standard allows wireless devices to be backward compatible, interoperable, and to work internationally. After WWII, the radio frequency spectrum in most countries was strictly controlled by the government, and was mostly allocated to police, military, and emergency service use. By the 1990’s, gradually, some of the high frequency (or “microwave”) spectrum was being derestricted. The 2.4GHz band became available in most countries around the world, and so it was adopted for several wireless technologies, including cell phones, Bluetooth devices and of course – WiFi. Now, nearly 30 years later, 2.4GHz band has become a very busy part of the spectrum indeed. The newer 5GHz WiFi band still has the advantage of much less data traffic – but due to physics, has the disadvantage of having a shorter signal range, meaning, the rooms in your home furthest from your router will have a noticeably weaker signal.

Both WiFi bands (2.4G and 5G) are divided into individual channels, each spaced a few megahertz from the next. By default, your router will automatically jump to the first channel it finds. However, you will get the fastest WiFi performance if you first check which channels have the least traffic and then manually set your router to that channel.

Once you download an app, you can see which channels are currently being used. Let’s start with the 2.4GHz band. 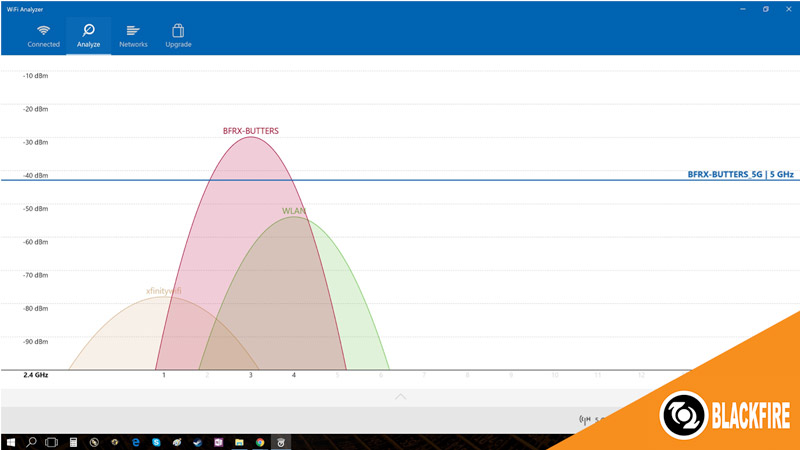 The ASUS router had auto-selected Channel 3, which is right on top of two other routers – probably my neighbors’ WiFi. As you can see from the image above, the channels above 6 look much clearer. So I opened up the ASUS router Configuration Page, which you can find by typing this local address into your web browser:  http://router.asus.com

Under Advanced Settings, I selected the “Control Channel” pull-down menu, and instead of “Auto,” I selected “Channel 11” to force my router to operate in the clearer part of the spectrum:

which means my router is much less likely to conflict with 2.4GHz band signals from other routers: 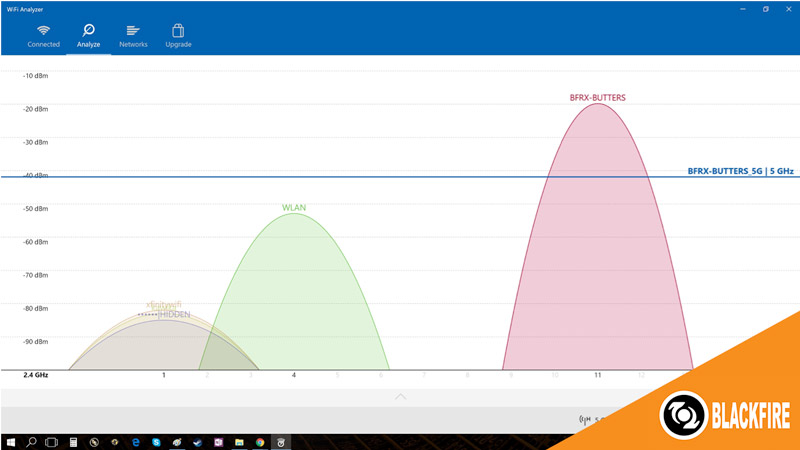 Next I checked the 5GHz band, which is much less busy; it looks like my neighbors have not yet taken advantage of newer routers like mine: 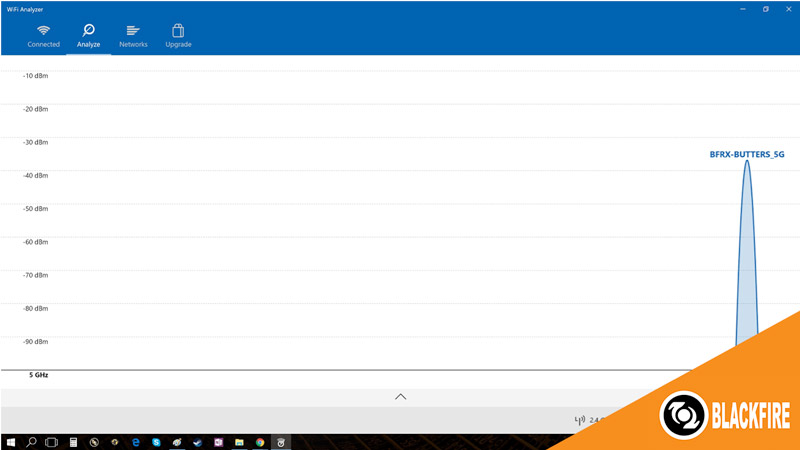 In the image above, my router (BFRX-BUTTERS_5G)  has been auto selected to Channel 161 which is in a clear part of the band (note that the channels between 48 and 149 are not available for WiFi). To make sure it doesn’t auto select another channel, I decided to change the 5 GHz band setting from “Auto” to fix it at “Channel 161” anyway, using the same method as before:

Once you’ve switched your 2.4GHz and 5GHz bands to clearer channels, you’ll experience less interference from other networks – meaning that you can seamlessly stream music or videos throughout your home, wirelessly, with much less chance of pesky dropouts.

Is Your Wi-Fi Network Ready for Wireless Speakers?

Blackfire in the News
Sound and Vision

In their Wireless Technology Special Edition for April, CIO Review magazine has compiled a list of companies that “have exhibited innovative strategies in the wireless technology arena” in 2017. We at Blackfire Research are proud to announce that we’ve made the list and have been named one of 2017’s “20 Most Promising Wireless Solutions Providers.” Check out the article, below, from CIO Review. 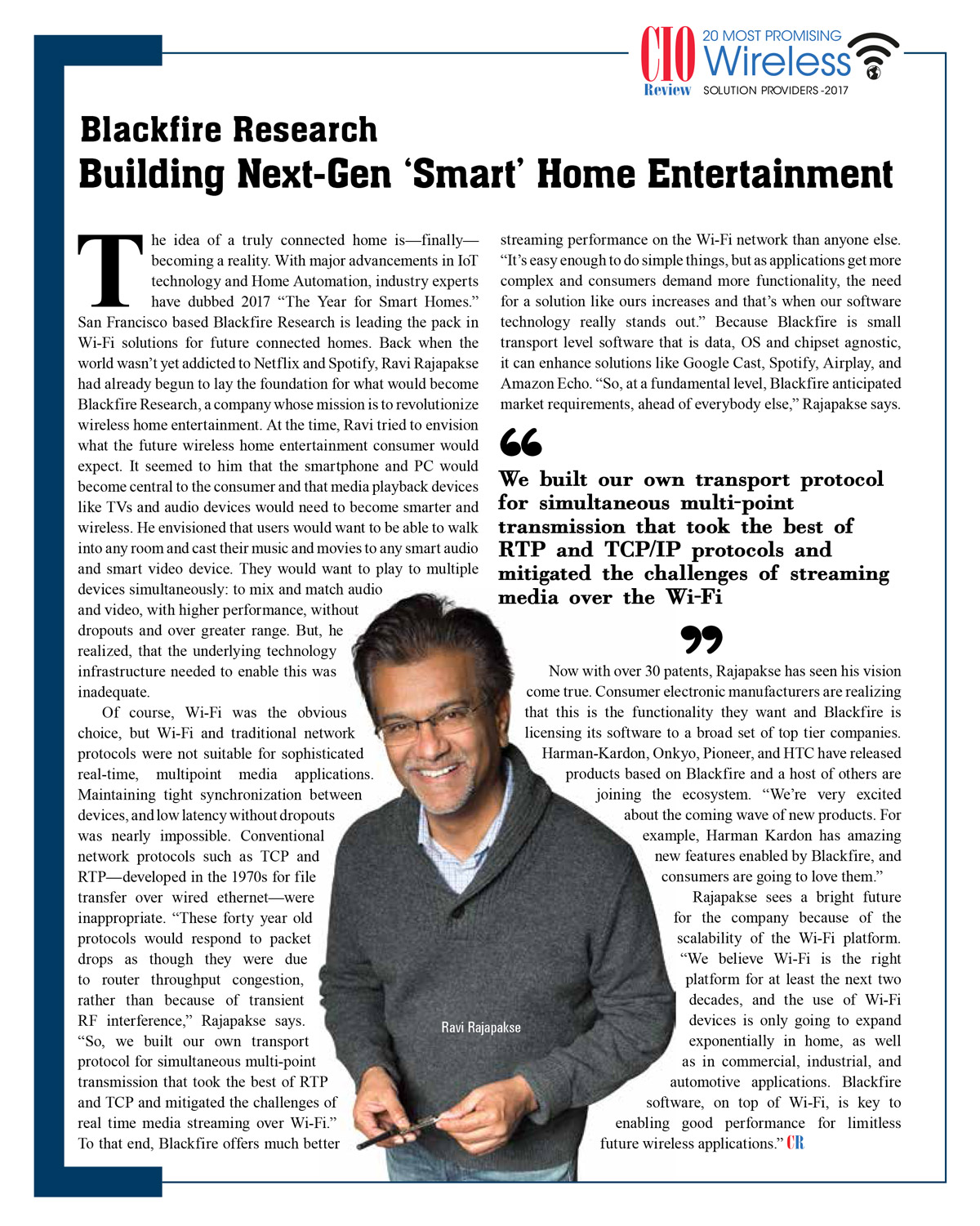