The HTC U11 Life is a more compact, less expensive version of the company’s widely popular HTC U11 smartphone, while the HTC U11+ is a larger, updated version of it with higher-end finishes, a 6-inch screen, and bigger battery. The U11+ is one of the first smartphones to ship with the Android 8.0 Oreo operating system out of the box, while the U11 Life runs on the Android Nougat with HTC Sense in the US. Both phones feature the Edge Sense, which was first introduced in the HTC U11, allowing users to trigger an action, such as summoning Google Assistant or Amazon Alexa, by squeezing the sides of the phone. Neither the U11 Life nor the U11+ have a headphone jack (RIP), which seems to be the trend on most smartphones nowadays. But HTC is giving audio quality a huge boost on the U11+, with 30% more volume than the flagship U11, better dynamic range and less distortion.

And of course, both the HTC U11 Life and the U11+ both feature HTC Connect, powered by Blackfire, which can stream any local or web-based music or video via Wifi from an HTC smartphone to any Blackfire powered stereo device, wireless multi room speakers, or entertainment system by swiping up the home screen with three fingers. With HTC Connect, users can create a wireless 5.1 surround sound system or stream different music to multiple speakers at the same time. (Check out this easy guide to help you wirelessly stream music from an HTC U11 smartphone to Blackfire compliant speakers.) Setting up your wireless home entertainment system has never been easier.

The HTC U11 Life is available in the US and can be purchased here.

The beautifully designed Invoke smart speaker is cylindrical in shape, with a narrow top and wide base (107 x 242mm), and comes in either pearl silver or graphite. The Invoke features 360-degree audio with three 45mm woofers, three 13mm dome tweeters, dual-band (2.4GHz/5Ghz) wireless connectivity, Bluetooth, and seven far-field microphones (which can be muted). Through voice commands, you can ask the Cortana powered smart speaker to stream music, set reminders, control paired smart devices, manage your Office 365 and/or Outlook calendar, ask questions, get the news, and make/receive hands-free calls via Skype to mobile phones, landlines and Skype-enabled devices. At the moment, the Invoke only works with three streaming services: Spotify, iHeartRadio, and TuneIn, but Microsoft has promised that Cortana will support Pandora sometime in the future.

And because the Invoke smart speaker is by Harman Kardon, you know the audio will sound great. In fact, according to Digital Trends, the Invoke’s audio performance beat out the Amazon Echo and The Google Home.

On this day in 1982, Michael Jackson released his iconic sixth studio album, “Thriller.” Even before recording began, Jackson was looking to create an album where “every song was a killer,” and boy, did he succeed! Featuring hit singles like “Billie Jean,” Beat It,” and “Thriller,” it remains the world’s best-selling album of all time, with over 105 million copies sold globally. “Thriller” won Album of the Year and seven other awards at the Grammy Awards in 1984. “Thriller” was an international success due to Jackson’s overwhelming star quality, it’s excellent songwriting and it’s combination of several musical genres, including pop, rock and funk. In 2003, Rolling Stone placed “Thriller” at number 20 on their list of “The 500 Greatest Albums of All Time.” Not only that, the music video for the song “Thriller” is credited as transforming the medium of music video from a promotional tool used by studios to sell records, into an art form.

This Day in Music History
FireCat
Leave a comment

Blackfire Research is proud to have their FireConnect Multi-room Technology in the new Pioneer Fayola FS-W50 Wireless Home Theatre System.

The Pioneer Fayola FS-W50 Wireless Home Theatre System is comprised of two wireless front speakers, a wireless subwoofer, and a main controller unit. The system is “wireless, elegant and extremely versatile.” Besides a power cord, no other physical connections are required, since the system is wireless. With built-in dual-band Wi-Fi, you can access your entire music library, wirelessly, through streaming services like Tidal, Spotify and Deezer, internet radio stations and locally stored music. The FS-W50 also features Chromecast built-in, Airplay, and Bluetooth to accommodate all streaming needs.

The Pioneer Fayola FS-W50 Wireless Home Theatre System is perfect for watching movies or television in surround sound. All you need is a second pair of wireless satellites – the streaming receiver of the FS-W50 is able to decode all current sound formats and automatically adapts to the available speakers. Your television and any existing A/V players can be integrated with the FS-W50 via the ultra-HD-capable HDMI connector panel.

If you’re looking to “kick it up a notch” and want to supply additional rooms with music, you can easily expand the FS-W50 into a multi-room system. With compatible WiFi speakers from Pioneer and other manufacturers, you can share your music to any and all rooms of your house via FireConnect Multi-room Technology by Blackfire Research.

For a full review of The Pioneer Fayola FS-W50 Wireless Home Theatre System, as well as more information on FireConnect Multi-room Technology, check out the review below from AV Hub. 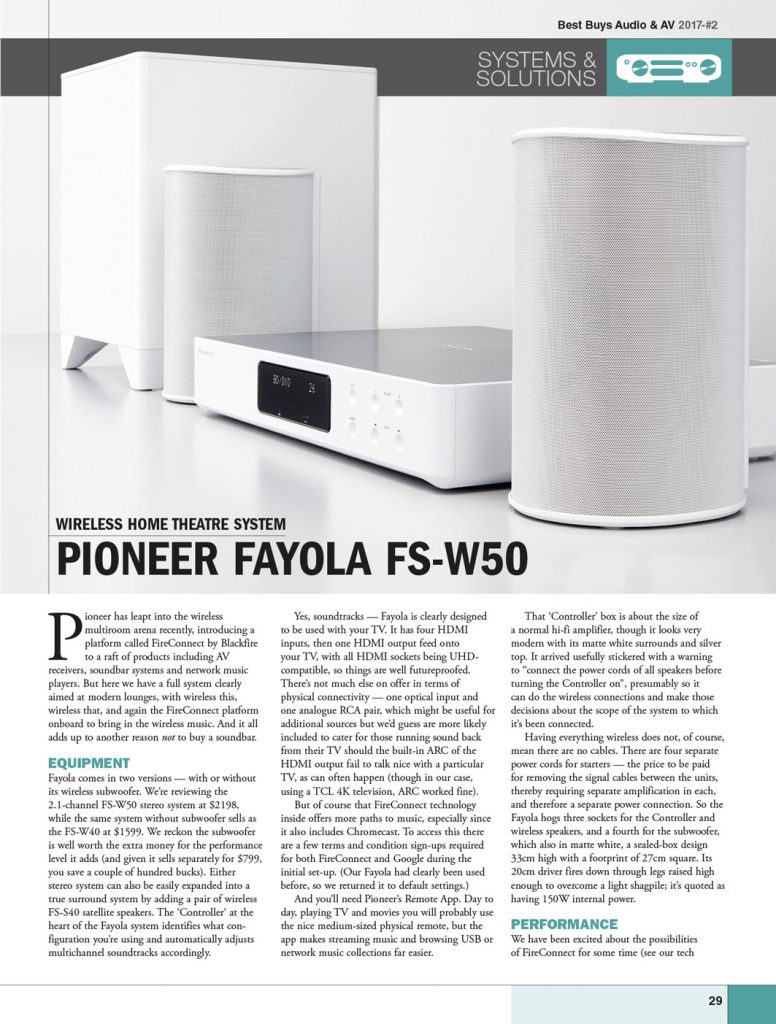 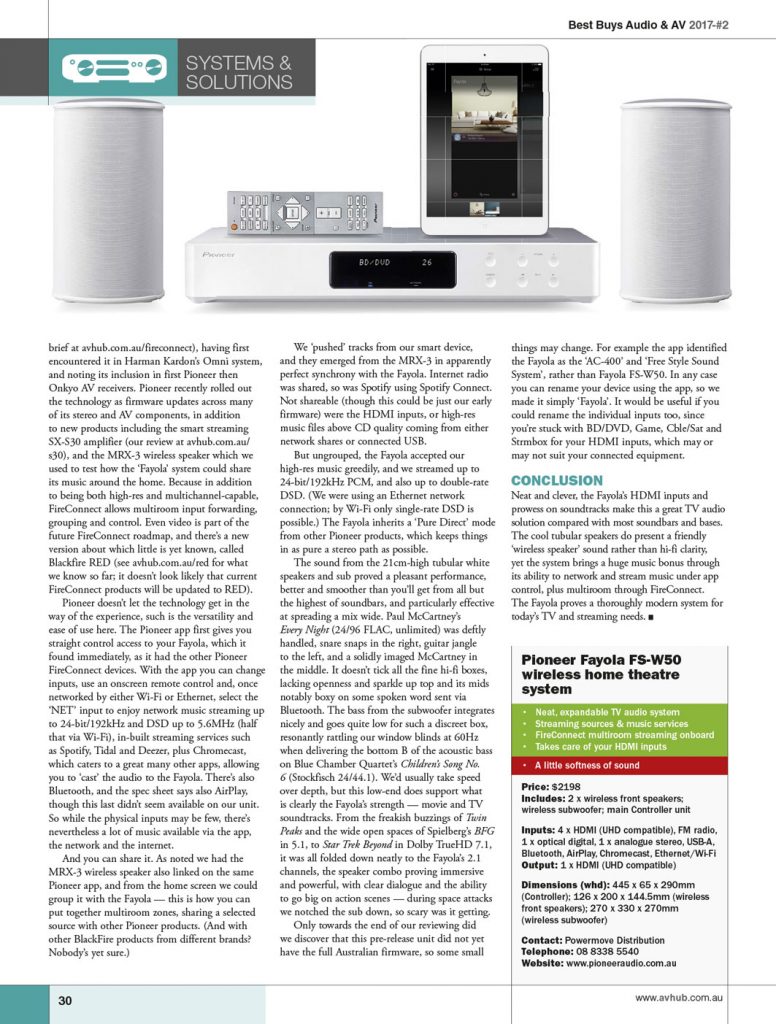 Top 5 Films to Watch on Thanksgiving

Thanksgiving is finally here! After the parade, the feast, the big game, and perhaps a match of touch football in the yard is over, what’s there left to do? Why, watch a Thanksgiving-themed movie of course! Thanksgiving is the only holiday where it’s acceptable to wear sweatpants at the table, stuff your face with a colossal amount of food, and gather ‘round the TV – so take advantage of it! Here is our list of the top 5 films to watch on Thanksgiving with your whole family!

It may feel a bit strange watching this film about lovable turkeys after devouring the feathered creature that same day, but Free Birds is a fun, animated film everyone in your family will love. Owen Wilson voices Reggie, a Turkey who finds himself the lucky spared fowl at the annual Presidential Pardon of the Turkey. He then meets Jake (Woody Harrelson), who takes him on an adventure back in time to exclude turkeys from the first Thanksgiving, thus saving their kind from mass slaughter each year.

Although technically a Christmas film, Miracle on 34th Street begins at The Macy’s Thanksgiving Day Parade, where Kris Kringle (Edmund Gwenn) notices that the man hired to play Santa Claus in the parade is intoxicated. After that, Kringle finds himself playing Old Saint Nick at Macy’s flagship New York store – but soon, he starts claiming he truly is Santa Claus, and his sanity comes into question. Miracle on 34th Street is a classic family film to kick off the holiday season!

The story of the first Thanksgiving has been fictionalized throughout the centuries to be a fairytale gathering of Pilgrim settlers and Native Americans breaking bread together for one glorious, peaceful evening. The real story about what happened before, during, and after that first “Thanksgiving” is nothing like the myth we tell ourselves as a nation, and Wednesday Addams in Addams Family Values is here to remind us that in true Addams Family fashion.

This short, animated classic is sure to put a smile on everyone’s face this Turkey Day! Join Charlie Brown, Peppermint Patty, Snoopy, and the rest of the Peanuts gang as they celebrate Thanksgiving with ice cream sundaes, buttered toast, and jelly beans. Good grief!

Nothing is worse than traveling during the holidays. In this film, Neal Page (Steve Martin) struggles to get home to Chicago to spend Thanksgiving with his family. Along his 3-day journey, he (reluctantly) teams up with Del Griffith (the late John Candy), an annoying, messy, shower curtain ring salesman. Martin and Candy are a legendary comedic-duo in this hilarious Thanksgiving classic, arguably the best Thanksgiving film to date!

We hope you enjoyed our top 5 films to watch on Thanksgiving. From Blackfire Research, have a wonderful, restful Thanksgiving and start to the holiday season!