The popular focus on smart home technology is on home automation, such as smart lighting, environmental control, smart appliances and home security. These technologies make up a rapidly growing, multi-billion dollar market. However, that is small change compared to retail. The retail market accounts for a quarter of the U.S. economy, or, about 100 times that of home automation (in 2015, U.S. GDP was $18 trillion and consumer spending accounted for roughly $12 trillion, of which, retail spending was $4 trillion). Growth in retail tracks the economy and has been slow – for instance, Q2 2016 growth was 2% year-over-year.  Online retail, however, expanded 16% over the same period and is now almost 10% of overall retail spending. It is no wonder then, that fighting to win control over this huge prize is the driving force behind The Smart Home Wars.

­   The (re)tail winds have shifted the smart home industry to not necessarily make smart products for the home, but rather, making a home smarter so it can buy products. The most ferocious battle for smart home domination is between Amazon and Google, and this battle is already transforming how we interact with our homes.

A River Runs Through Your Smart Home

With revenues of $100 billion, Amazon is the world’s largest online retailer. Amazon is relentless in its goal to establish and maintain strong, long-term relationships with their customers. They pride themselves on making innovations to make purchasing easier, already taking immense strides to make the home “smarter” for purchases. It comes as no surprise that Amazon’s smart home product direction is geared toward enabling growth in retail sales through immediacy and ease of use.  Amazon’s Dash buttons and the Amazon Echo, along with the Echo’s siblings, the Dot and the Tap, are poster children for a smart home in its formative years.  Dash buttons are essentially free ($4.99 for a $4.99 credit), and each is associated with one of a few hundred household products, such as Bounty paper towels, Tide laundry detergent, even Diet Coke. The Dash Button is simple: a press of a button initiates the product’s purchase and delivery to you (all through Amazon). However, Amazon’s most major advancement in smart home technology is the Echo. Echo is a Wi-Fi connected smart speaker, whose key innovation is its skillful application of voice recognition and AI responses. It can play music, provide web search results, and control home automation devices all through voice command.  Amazon wants to make the Echo indispensable in the home, and provides a platform for third parties to write programs that leverage the Echo’s voice recognition and connectivity.  This will make the Echo’s value increase over time as its functionality expands, much like the Google and Apple app stores. However, the Echo’s main value to Amazon is it’s ability to maintain shopping lists and make purchases from an increasing selection of products through Amazon. This is the biggest step in smart home technology and has set the bar for any competing devices. As investment continues, the Echo will eventually be able to make most of your household purchases on demand or (where AI technology and the market is headed) predictively. This will lead to consumers making more purchases through, and increased loyalty with, the Amazon ecosystem.

Google has proven itself the leader in developing AI technologies, placing it at the forefront of innovation for smart home solutions. Although a bit late to the direct-to-consumer marketplace, Google’s heavy investment in AI has it marching into battle with a fully loaded arsenal. When you have $80 billion in cash, you take a few chances. To have a more direct presence in the home, Google has bought Nest and Dropcam, released Chromecast Audio, Chromecast Video and Google OnHub, and even made their own Amazon competing retail delivery service - Google Express.  Most recently and most loudly, Google has released Google Home, a voice-activated smart home speaker.  Google Home was unveiled earlier this Fall to positive consumer and critical reviews. Like the Echo, you can use Google Home to search the web, set reminders and play music from your Spotify account (as well as other streaming services). However, a major reason behind the introduction of Google Home is defensive. Internet advertising continues to comprise the vast majority of Google’s revenue. And, a large part of that revenue is related to retail.  U.S. internet advertising revenue was at $60 billion in 2015, and growing at 23% quarter-over-quarter in Q4 2015.  Of that $60 billion, 22% was from retail, and another 13% from fields closely related to retail. It is the loss of this revenue that Google is threatened by with Amazon’s smart home successes.  Consumers using devices like Amazon’s Echo and Dash undermine Google’s growth in its search revenue: the more a company like Amazon gets consumers to buy directly through their platforms, the lower the need for individuals to search and browse the web to find products, and the less money Google makes through ad sales. Google must protect their search business at all costs. 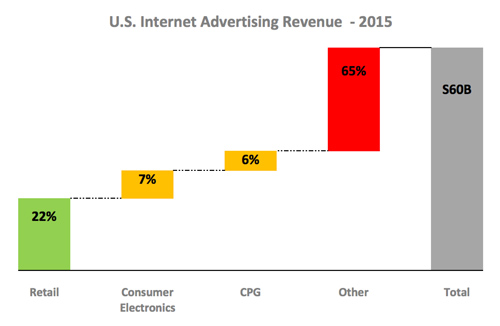 Amazon Echo and Google Home. Two similarly shaped speakers with similar functionality and similar intent.  So, who will win the “Smart Home Wars?” On the one hand, we have a retail giant with a clear focus on consumers and the ability to churn out innovative products. On the other, a company with, probably, the largest collection of software talent and massive AI skills. Each is fighting for the future of their core business. There are two distinct directions their smart home innovations favor. Amazon is all in for ease of purchase, it’s “one stop shop.” If Amazon makes their shopping experience the most intuitive and convenient, they have a large shot at controlling the retail market. For consumers, however, the captivity of convenience will alleviate pricing pressure on Amazon and lead to higher prices.  At least, prices that are higher than they would otherwise have been. Google is repurposing its basic search engine for smart home products and AI, making it easier for individuals to find the best value for their retail purchases. Google’s investment in AI technology also means that it leads the industry in the most innovative ways to predict what you may want, or need, for your home. The winner may well be decided by whether consumers prefer convenience (Amazon) or whether the ability to find the best deal is more important (Google).

Back to the Smart Future

Conventional wisdom predicts a bright future for smart home products and solutions. It’s still in the early stages, so what shape the products take and what revenue streams the solutions inspire will only unfold in time.  The importance of retail is driving Amazon and Google to make the Echo or Home indispensable, and to try and make them the “hub” of the future smart home. However, the market is young and growing rapidly each year, and there will inevitably be additional competitors in this space - Apple will certainly play a part, Microsoft will likely build something based on Cortana, Samsung and LG are working on voice-based assistants, and other players like AT&T, Comcast, and Sony seem poised to enter the field. Amazon and Google chose the humble speaker.  The ubiquity of speakers and their naturalness for two-way communication through the clever use of voice interface and AI makes this the most compelling effort so far. But they still have a long way to go. While a hub based on home entertainment is persuasive, consumers are still looking for products that can not only replace existing ones, but connect the entire home into one large system. Amazon and Google’s focus on retail and associated aspects of the smart home experience has led to initiatives that do not meet consumers’ complete home entertainment needs. The natural path for the “Next Big Thing” in smart home technology will incorporate comprehensive wireless home entertainment into the hub:  speakers throughout the whole home with multi-channel 5.1 capability, TVs with varying streaming and gaming platforms, and your smart phone, all connected, all on standard Wi-Fi.

The battle is just beginning, with the field, and combatants, not yet fully defined. The war is nowhere near over.

About Rohit Verma - Rohit is the head of  corporate strategy and CFO at Blackfire Research Corp. He has held executive management positions in wireless and software technology companies, as well as management consulting at A.T. Kearney, with an expertise in strategy, corporate finance, and business development. Rohit holds a Ph.D. in economics from The University of Pennsylvania with a focus on strategy, and received his undergraduate degree in computer science and mathematics.
Amazon, blackfireresearch, cutthecord, echo, environment control, google, Google Play, home automation, home entertainment, security, smart home, smart lighting, wifi, wireless, wirelessaudio
Leave a comment